The topmost layer of soil in which plants grow is called soil. It is generally black or brown in color. It consists of organic matter, clay, sand, silt and rock particles. It also contains water and air. The soil is very important as it supports plants and other life forms.

Soil takes several years to form. The soil is formed by weathering of rocks.
Big rocks are broken into small piecesover time with the effect of wind, sun and water. This process is called weathering.

Gradual wearing away or washing away of the top layer of soil is called soil erosion. Physical forces of wind and water are the primary causes of soil erosion. Trees helpin avoiding soil erosion as their roots firmly hold the soil. Deforestation is largely responsible for soil erosion.

Following are the 5 layers of soil: 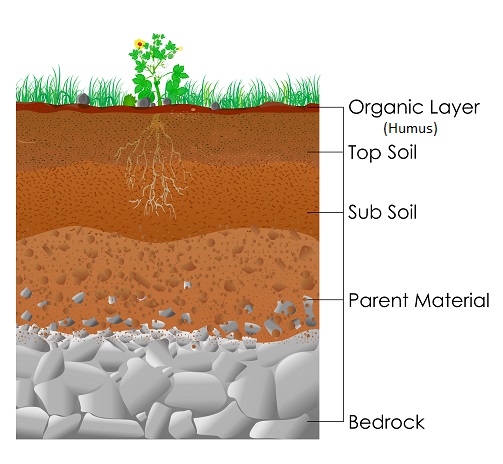 The topmost layer of soil is called humus. Humus is the organic matterwhich is made up of dead plants and animals. Humus is very fertile and helps plants to grow. Humus is dark brown or black in color.

Topsoil is below humus. It is very fertile and contains microorganism. It is rich in minerals.

The subsoil is below the topsoil. It is the home of earthworms.

Small rocks are weathered rocks below subsoil. Roots of very few trees reach up to this layer.

Bedrock is the bed of newly formed rocks. These rocks are big.


Get me the extra edge for Olympiads Exams